SAGE is a design quality assurance technique that can keep your work from becoming more difficult and complicated than it should have been. Looking at your software through the lens of SAGE quadrants can keep you safe from the most common setbacks and slow downs in software projects.

Design mistakes are subtle, and not immediately visible. Once a design mistake has been hardened and entrenched by afference, it’s often impossible to correct. SAGE makes design mistakes visible while it’s not yet too late to fix them.

SAGE is an acronym that stands for Specialization, Afference, Generalization, and Efference. Each of these four are measurable software design qualities.

The four SAGE qualities can be visualized as quadrants, and used as a way to determine whether your design will be a magnet for trouble. 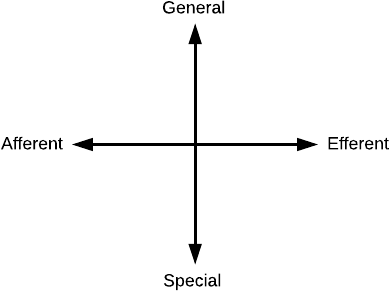 Afference and efference form the coupling dimension, and generalization and specialization form the conceptual dimension 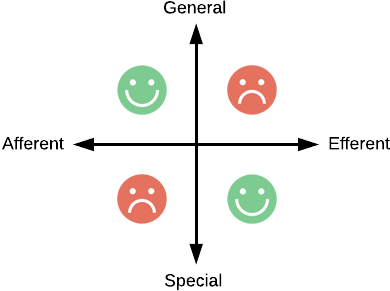 The happy quadrants have qualities that enable us to work without unintended consequences and unnecessary complications.

The unhappy quadrants feature the counter-productivity that radiates outward, expands, and compounds exponentially.

Controllers are close to the user interface. So, they’re right next to the user. They represent specific things that a user wants to get done.

Models are general. They’re used by numerous other classes, often controllers. Those other classes may have diverse goals and responsibilities, but they all use the model in the exact same way. A model is generally-applicable to a number of scenarios. Those scenarios have far more diverse and variant behaviors than the model does.

Nothing really makes calls to a controller except for the app server or web app framework infrastructure. There’s a front controller or router sitting in front of a controller that drives the controller. But there isn’t really much in the way of afference, and the afference that does exist is highly standardized.

Controllers are efferent. They call out to and coordinate other parts of the system, including models.

Models receive calls from potentially many controllers or other parts of the system. A model may have ten different controllers calling it. The model is general-purpose. It can be used in diverse scenarios. A controller represents only one of those diverse scenarios, and serves that single scenario.

A good SAGE assessment of a healthy implementation built on MVC patterns will have the right things in the right places: 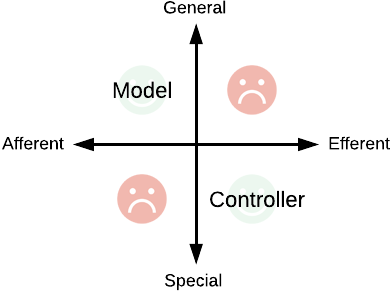 The General/Special Rule: Everything in Its Place

Never get this mixed up and never make exceptions. If you find yourself between a rock and a hard place and tempted to make an exception then there’s a problem elsewhere with the design. Find it and fix it. Don’t let it fester in your code. You’re already seeing the secondary effects of viral infection due to adjacency.

If, borrowing from the MVC example, you end up with scenario-specific controller logic in general-purpose model code, that reduces the cohesion of the model, which in turn attracts parasitic afference to that model, which will make it difficult-to-impossible to improve or a correct. Where ever you put afference attractors, make sure that you’re certain of that design. You won’t get very many opportunities to make corrections if you get it wrong.

Afferent coupling is like the walls closing in in the garbage compactor in Star Wars. The more that a piece of software is used or called by other pieces of software, the less liberty or license it has to be able change; either to be corrected for some defect or to be improved for some new realization. Every change means making changes to all the other parts of software. And those changes can have cascading effects along their lines of coupling.

Efferent coupling is the force exerted outward from some piece of software. A call made to another class is an outward expression from the perspective of the software making the call.

Some unit of software can be highly afferent or highly efferent or something in the middle with equal parts afference and efference. Those things in the middle ground might be naturally challenging to work on. Those challenges can be amplified beyond reach if coupling is out of alignment.

General and special apply to software in a couple of ways. There’s the generalization and specialization of abstraction, sub-classing, polymorphism, role interfaces, and such. And there’s the notion of something being general-purpose or special-purpose. Both of these dimensions are reflected by the conceptual axis.

A special-purpose piece of software carries out some particular usage scenario. It typically coordinates an assortment of other objects or things to get it’s job done.

When the right coupling is in the right place, the adjacent software improves sympathetically, and doesn’t radiate sickness outward to other parts of the implementation. It stays healthy and easy to work with.

The same can be said for putting general and abstract code in a specialized, concrete place, and putting specialized code in a generalization. 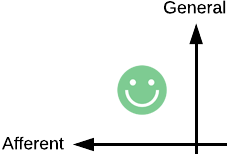 This quadrant features inbound calls that limit the receiver’s ability to change, and either general-purpose or abstract, generalized code that should not need to change. 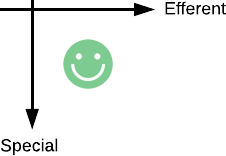 Because they make more calls than they receive, they’re easier to change. They have low afference. 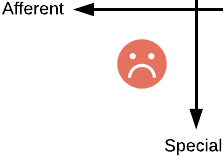 This quadrant features inbound calls that limit the ability to make a change, but also features scenario-specific logic which will likely cause the code in this quadrant to need to change.

Code in this quadrant is usually scenario-specific code. Scenario code is closer to particular user, usage, and business requirements. These things tend to be more capricious. They tent to need to change more often. 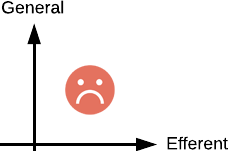 However, it would also be general-purpose or abstract. It would be coordinating a number of other pieces of software, and it would be a stable, unchanging implementation of such coordination of other things.

The absence of afference on a general-purpose, multi-use piece of software is a bit of a contradiction. It’s certainly possible to have parts of your design that fit this quadrant, but they’re more uncommon and somewhat odd.

SAGE can help you immediately spot the real trouble spots and fix them immediately. And the more you use it and apply it, the more automatic and instinctual it will be.

SAGE is a guideline. You can make hard measures of coupling and generality and abstractness, but you still need to be able to make a judgment call about what it means to your design. Sometimes your decisions will be straight forward, and sometimes it’s not going to be so clear, and you’ll need to invest a little more thought into it.

Understanding the interplay of coupling and generalization is absolutely critical to writing code that doesn’t drag you into its own hell. It’s also a good entry point into the ecosystem of design principles and design qualities that will only make your job easier and your work more rewarding.

SAGE is effectively a restatement of Bob Martin's Distance from the Main Sequence metric.