Join me in wishing Nathan a happy 1st birthday. The first birthday after escaping death by grace of some inconceivably small margin.

He fell 45 feet and spent the next six months injured so completely that “smashed” was the word that kept coming to mind when people would ask for updates.

Smashed feet first, so they were the first things to break. The shock wave initiating at the metatarsus, into the tarsus and firing straight back. A microsecond later later the heels explode in a crossfire distributor beam of tarsal detonation and heel impact. In the next instant, the pressure wave and the inbound skeleton smash through both shins. The detonation wave jogs to the left and smashes through the femur, jumps the pelvis, and completely spares the rib cage. Nah, just kidding. It smashes through eight ribs on one side, seven on the other, and breaks the sternum as it exits the chest and heads for the head. Neck and spine snap forward, rupturing the jugular vein. If you look at Nathan today, it’s not exactly the same face that smashes into the turf a microsecond later. An incision from ear to ear, over the top of the head is how the 3D-printed replacement cheekbones are installed. The jaw is smashed into literally uncountable fractures and is wired shut for months. The nose smashed inward, remaining a jagged break, and inward, concave scoop to this day. A tracheotomy tube goes into that divot in the throat and a feeding tube through the abdominal wall. The worst of the leg injuries are plated. Several surgeries are smashed together in the first night. I lost count of how many surgeries followed. 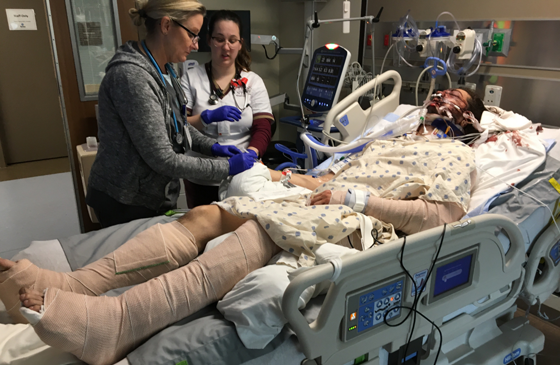 Months in, when Nathan was finally allowed take in sustenance in a way that didn’t involve having it pumped through a tube directly into his stomach to eat, the hospital happened to be serving fish tacos that day. So they tossed the taco’s tortilla, fish and all, into a blender and served it as a disgusting, liquefied stink smoothie. I wouldn’t be surprised at this point if the story proceeded with, “And then they poured itching powder into his bandages.” The entire thing is one unending, indignant kick in the nuts.

While we’re on the subject, the nuts weren’t smashed. Neither were any organs. The spine wasn’t smashed. The eyes weren’t smashed. No brain injuries and no spinal injuries. No nerve damage anywhere along the shock wave’s path of destruction through his body. Some teeth were smashed. An inconceivable stroke of luck, as far as you can use “luck” to characterize any of this.

The tiniest fraction of infinitesimal luck. Just enough so that we’re not having conversations about Nathan’s legacy today. But let’s talk legacy.

One of the most insightful, self-examining, honorable people I’ve ever worked with in software, and one of the best friends a person can have. Steadfastly impervious to the geek psychological traps that draw software people to the cheap thrills of joining in on a mob attack like moths to the fire. Truly committed to integrity. Truly committed to diversity. Truly driven by courage. Committed to leaving things better than it was found, and leaving no trace of self-aggrandizement. More courage then the next thousand geeks combined. Disposed of a deep knowledge of software design and software process, immune to the fads that blatantly neglect fundamental principles, and unyielding to the pressure to abandon principles. And capable of wielding software development from the embedded system up to the web UI. And of course, the Eventide project would still be largely hypothetical if he hadn’t written the hosting infrastructure that actually lets it run on an actual computer, and built the only testing framework I’ve ever seen that is positively joy incarnate.

So, on Nathan’s birthday, the well-deserved aggrandizement can be our charge. Not just for amazing work in software and software community; in being the change you’d want to see in the world, but for surviving against staggering odds, and remaining dignified in the face innumerable and unrelenting indignities.

Happy Birthday, Nathan. This year has kicked you relentlessly while you were down, and while you can’t quite kick back yet, I’m glad that today we can at least get burgers now without the existential insult of having to run them through the food processor. And hopefully on your birthday next year you’ll be walking again, the rest of the surgeries will be in the rear view mirror, and we’ll all be somewhere raising a glass to the fact that we can toast incredibly near misses rather than absent friends. No one has to tell you to stay strong. I’ve never seen someone put up with so much all at once. You make my life better, and I can barely bring myself to imagine the alternative.

And I know you don’t want me to disclose that this is your favorite song, and how deeply it moves you when it comes on, but on the occasion of your first birthday since the accident and your incredible survival, I think people deserve to know full depth of your heart. Especially because you’d never think of seeking glorification for yourself, your work, and your life. You can seek reprisal later, but for now I just wish they could see this side of you the way I have been able to, and be inspired by your spirit: